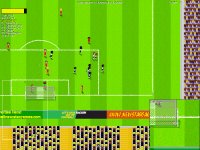 Sensational Soccer is the latest football simulation by Si Read which expands on the concept introduced in New Star Soccer 3. Instead of having a single player limited to league and cup games, it's now possible to manage an entire team in single matches, full seasons or quests for silverware.

Certain improvements to the engine are quite subtle. Through passes can now be executed with pinpoint accuracy, allowing for more flamboyant displays of one-touch football. Crossing has been made much easier though offsides happen rather frequently due to improved defence AI.

All player names have been altered slightly since it's not legally possible to replicate them without a license to do so. Still, football fans would have no problems telling apart one teammate from the other since the names and stats just about match their real counterparts.

The game is not without a problem or two though. Training points do not carry over to the subsequent weeks, and it can be rather tiring when repeating sessions with each player in order to improve their skills. But these are just minor issues that the developer will most likely address when updates are released.

Another feather in Si Read's decorated hat and a worthy addition to any footie fan's collection.