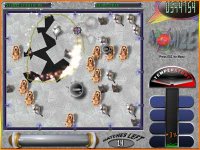 Atomize from Buried Alive Interactive is a tricky game to describe. A mix of Quantum and MCF: Huntsville, your task in each level is to draw a circle around a set of objects that matches the one shown in a bar at the bottom of the screen.

Like BreakQuest, you won't find yourself playing the same level twice although they have been grouped nicely into several themes. There are a few unsavory elements to watch out for, such as ions and particle streams. Running into them while you're drawing an Atomize Beam will cause your energy level to increase. A meltdown begins if the energy level hits maximum, and the only way to bring it back down is by making matches, atomizing ions or completing levels.