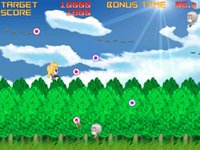 CloverWing and Iincho are two excellent shooters from Eikyuu Loop featuring a dash system not unlike Suguri. The objective of the game is to earn enough points and meet the target in order to progress from one level to the next.

Points are earned by taking out entire waves of enemies, then collecting the items that they leave behind. Press space to shoot, and tapping the Z key while holding down a directional button will cause your character to dash in that direction. She will be invulnerable for a short period right before stopping. It's a skill that will be used often as the protagonist is extremely slow when it comes to moving around. Some bullet formations can only be dodged by dashing past them.