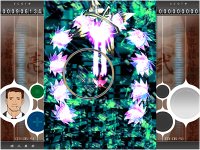 +Cebo is a new shooter by Alice from Japan, and as described by postman this is how Rez would probably look like if it was ever turned into a true shmup. A shield can be activated to negate enemy bullets, though it requires a recharge after a certain number of uses. Hold the Z key to shoot and press the X key to protect yourself momentarily.

Conversations can be skipped by pressing the V key. To play in full screen, change the first option in the configuration menu located just above the resolution select field. The trial version can be a little tricky to download, just find the word 35MB on the web site and click on it. Look for a pCEBO.zip file under the pCEBO folder, which contains the game after unzipping the demo package.

I've recorded a gameplay video and uploaded it to YouTube. Had originally planned to complete the stage without any damage but I got pretty lazy towards the end.

Very pretty, but I find the gameplay to be fairly monotonous. The colours are more distracting than anything.
Post a Comment
<< Home
Recent Comments
Recommendations